the latest vanderveer...but not mine!

Introducing my new nephew!! the story is below if you are interested, its pretty bizarre and pretty ridiculous how fast max entered the world, but the pictures are cuter than the story, so they come first...:)
Maxwell Craig Vanderveer
6 lbs. 12 oz.
November 22, 2008 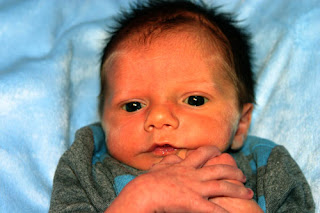 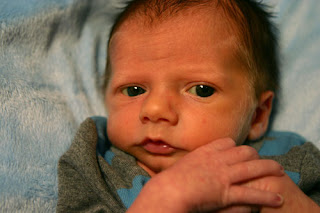 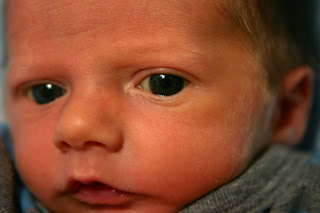 So, here's the story from my perspective...cuz most of you know me...but Kyle's story is on her blog.
Friday night...Kyle calls to say her blood pressure has gone wacky and she is in the hospital, and they are going to induce her in the morning....
Saturday morning: 9am... i called kyle's mom and she said they broke kyle's water at 8 am to start the labor. she had minor contractions, but not enough, so instead of using pitocin, they broke the water.
9:30am: a text that says kyle is dilated to 5 cm... i'm thinking, ok...she's moving along good....hopefully won't take all day....andy left for the hospital, but i decided i had time to wait for my sister who was coming over, and i'd just go after she came, so i could leave the boys there.
10:15am: my sister walks thru the door, and andy calls me to say that the baby is already here! i grabbed my stuff, left my sister to fend with 6 kids by herself...and cried all the way to the hospital cuz i had missed it. i had really really wanted to be there---in case you don't know...andy has an identical twin, and this was his first baby, so there is just a lot of excitement wondering if the baby will look like my boys...and plus we didn't know if it was a boy or girl....etc. i wanted to be there. anyway...after hearing more details, i knew there was no way i could have made it, cuz she went from being dilated to 5 ---all the way to 10 in about 5 minutes...and ya know how i got that text at 9:30 saying she was at a 5? max was born at 9:46am....CRAZY!!! they had been praying for a fast delivery since she wanted to do it without an epidural...and the Lord really granted that prayer! :)
Posted by The Vandy's at 9:23 AM

What a little cutie!! I check their blog from time to time. I'm so glad that everything went so well!

What great pictures! I am so glad that Max is going to have such amazing cousins, aunts and uncles in his life! He is a very blessed boy!

Cute kid! I didn't realize you guys had a blog... I'll be sure to check back for more Vanderveer updates (even though I carpool with Andy).