well, my middle man is turning 7 next week. and since his bday is on wednesday...which is our craziest day of the week...we decided to celebrate with him early. he invited a couple of friends over and we had cake...then went to the pool to swim! 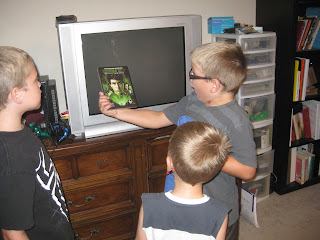 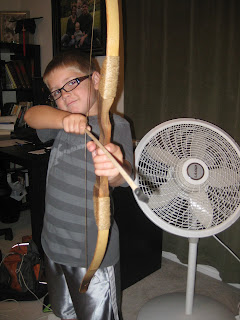 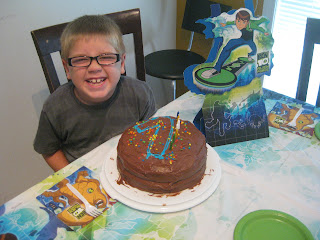 being super goofy...but he asked for a chocolate mint cake. this is the cake my mom made for me every year growing up. its a family favorite...but it has milk, so he has never gotten to eat it! until a few weeks ago after his NAET treatment...and obviously, he loved it! 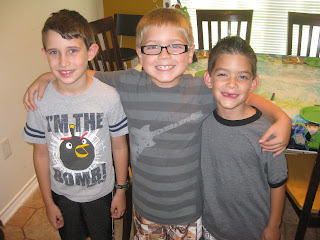 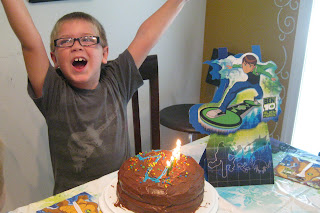 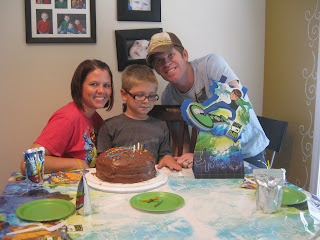 apparently he wasn't interested in taking a picture with his parents. 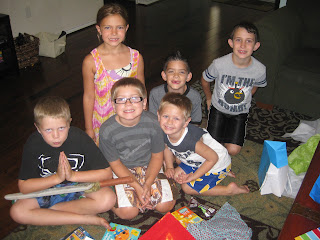 the birthday gang...logan, kylie, ian, luke, tysen, and tj
Posted by The Vandy's at 8:17 PM No comments:

last month we got in a visit with the brotherhood. at least 15 years in the making...maybe more.
its a rarity to have friends like this. and now our kids get to grow up together. look at this slew of boys! 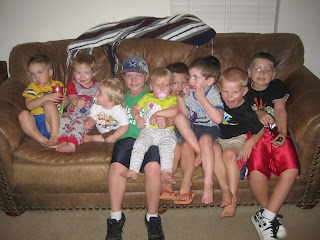 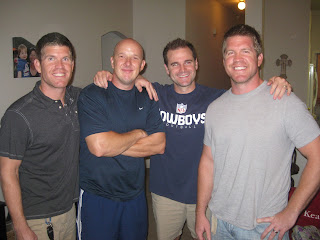 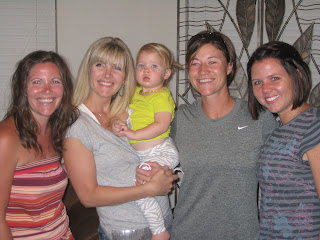 for any parent or person who deals with allergies...this is a worthy read.

last week our lives changed. anyone who knows me, knows that my middle kid, ian, has been allergic to milk since birth. he was on soy formula as a baby because he would violently vomit regular formula. at 9 months, he had 2 tiny bites of my icecream...and within 15 minutes he had hives and a swollen eye. a couple of times he accidentally got his brothers cup of milk...and would be vomitting within 10 min. if he ate a cookie or bread or cracker that contained milk...his throat would itch, and he would get splotchy hives around his mouth. i've carried an epipen in my purse..."just in case". this is what i've been used to for the past 7 years...and we have totally cut milk from his diet. as he has gotten older, he has noticed that he doesn't get the same things as his brother...and he has been SO sweet about it...but it always broke my heart. he can't eat lunch at school, we take a peanut butter sandwich in case the restaurant doesn't have an option for him, he had to have a separate treat at birthday parties...etc, etc.

until last week.
we heard from a few friends about a dr. in denton, tx who does an allergy elimination technique called NAET. she does a series of natural tests to determine allergens, then uses accupressure to eliminate them. it took me some time to wrap my brain around it. and honestly, i still don't get it. :) but, last week we went and ian was treated (we actually found out that he was allergic to milk, fish, smoke, and weeds)...she describes allergies as sort of a gliche in your system...its related to the nervous system...but your body doesn't recognize a substance and it attacks it as a toxin. so..this treatment is essentially "reseting" your system to know that it doesn't need to attack a certain substance. and i promise you, when she explains it...it makes complete sense. she was so open to questions (i called 3 times before my appt with more questions)...more than anything, if you're interested, i would encourage you to call them with your questions, but feel free to ask me too!

this is my sweet kid praying before his appt...wish i had recorded that precious prayer. 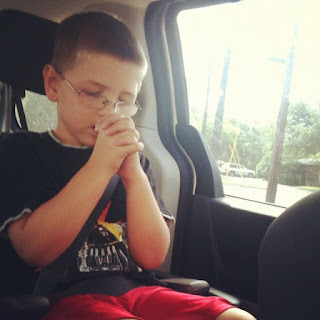 ok, so the procedure is bizarre. ian holds a vial of the allergen in one hand...and she presses on his other raised arm. if he is allergic, he cannot hold his arm up. she presses on his arm, and there's just nothing he can do to resist the pressure. so...she goes through the series of  most common allergens and sets aside what he is allergic to. then, he holds the vials in his hand (it will depend on how many you are allergic to and her treatment plan but we were able to do all of ian's)...and he lays on his stomach while she does accupressure along his spine. he does a series of breathing patterns while she repeats the pressure points...and when he turns over, his arm is strong and resistant...still holding those same vials.
yes. its crazy.
but...it worked.
the major catch is that for the next 24 hours, he had to completely stay away from those allergens (which she will explain and tell you exactly what to do depending on your allergy)...but after that...its done. we went back in for a re-check (which isn't always necessary, but i wanted to since i live out of town, but was still in denton that week)...and he was cleared for all those allergies.
there were no drugs involved...so nothing potentially harmful...just a natural and holistic treatment! one week later, he has had a completely normal diet...with zero reactions! we are soooooooo excited for him...and in all honesty, i can't wait to plan my meals for this next week!!!! :)

**this was the part that i was NOT prepared for. the past 7 years, we've trained ian to stay away from anything with milk. and he knows very well what happens when he doesn't. so there was a mental part that i was not expecting at all! the first day he tried a few sips of milk, then just got weirded out and said his throat felt weird. i was stunned and shocked and thinking, "you have got to be kidding me...this didn't work". he wouldn't try anything the rest of the day. that evening we had burgers, and he saw the nacho cheese doritoes, and for some reason, that sparked his interest. he asked if he could have some, and he LOVED them! usually he would have broken out with splotchy hives around his mouth... but there were none! he started a piece of cake that contained milk, and did great with it...but i was talking to my brother about it all, and as he listened, he just shut down and wouldn't finish the cake. i began to realize the mental part was the hardest part for him. he was really scared to try anything! when he didn't react to the chips, i was pretty confident, but he wasn't yet. the next morning he ate yogurt with zero reaction (he should have been vomitting). he asked for a bowl of cereal...but then asked if it was real milk. i said yes, and after 2 bites, he said that his throat felt weird and he was done. i felt super confused. we had our follow up appt...and the dr explained that sometimes...with kids who are older and know what's going on...its scary to try these things...and their mind can create the symptoms they know they are supposed to be feeling. for more severe allergies, she definitely recommends coming in for a follow up appt before trying the allergen...
slowly but surely ian began to gain confidence that he wasn't reacting to anything anymore! and yesterday was the kicker...he drank chocolate milk...with NO reaction! i about cried...its just still so amazing!
so--if you have or know someone who has allergies...check this treatment out. it has changed our life! 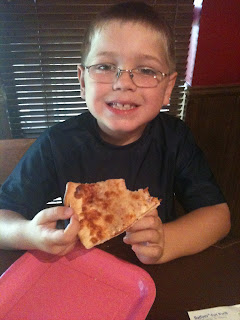 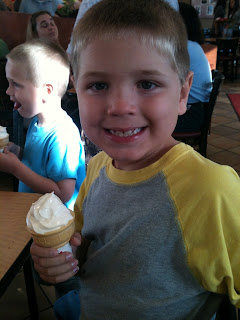 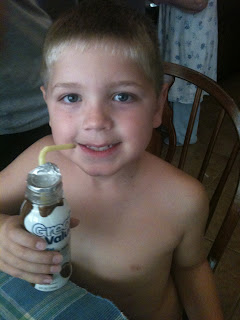 just had a few pictures that i loved... 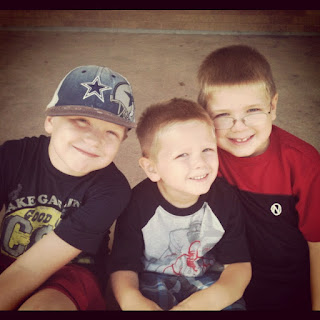 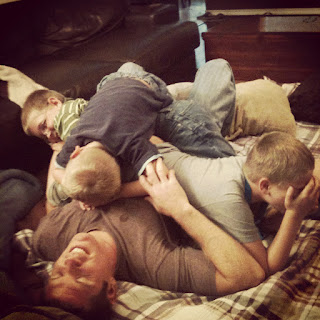 logan and his buddy, james... 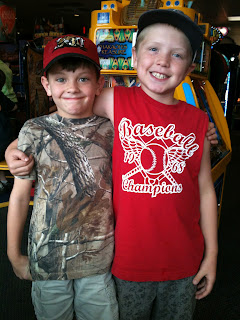 a moment in my home that was quiet...its just so rare i had to record it! 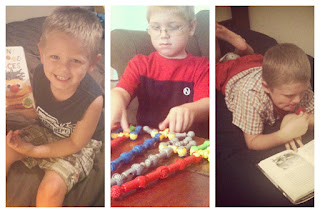