the baby sister is married...

you really feel old when the sister who is 8 years younger than you is married. and i think...she is way too young to be married!! then i stop...and realize that i was her age when i got married.
BUT STILL!!
i'm so proud of her...and her new husband, thomas...congratulations to the spooners!! 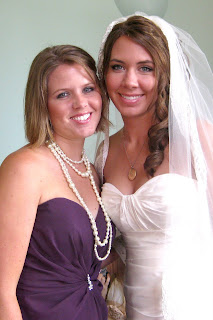 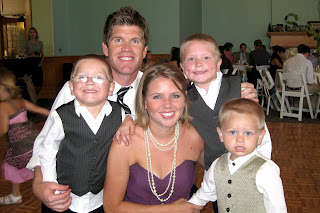 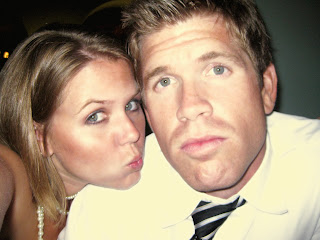 this year we went to ritchey and kobi's house to celebrate the 4th of july. they live in weatherford, so we got to do our own fireworks. we grilled out, and the food was awesome (thanks ritch), and of course, we all had a great time hanging out. it wasn't as hot as normal, which made it nice when we were outside. the fireworks scared the boys...but it was still fun. by the end of the night, ian was inside the house, and tysen would just cover his ears while in my lap.

max and tysen having twizzlers together. i think tysen had just finished his, but is still chewing. 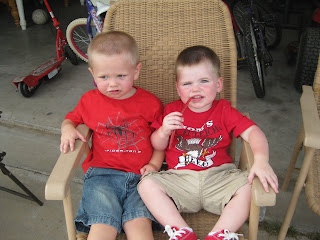 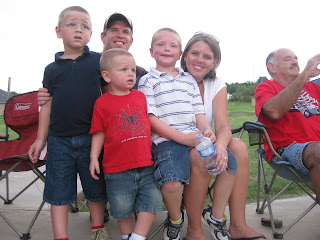 tysen and katie...he follows her around constantly and asks for hugs from her...:) 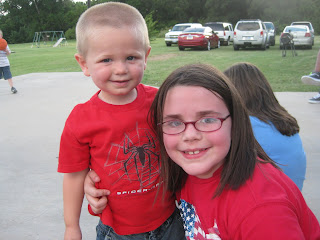 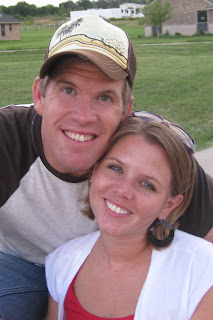 his first sparkler....a little nervous, but didn't want to be left out! 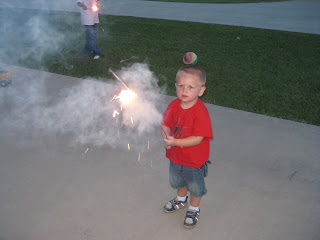 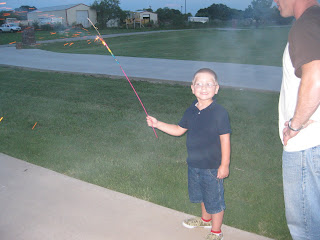 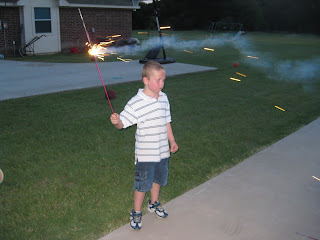 tysen hanging out with ana and papaw.... 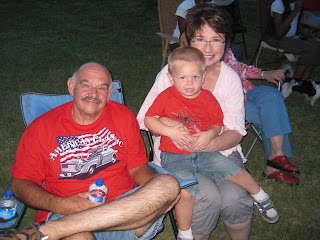 not sure about ian's crazy eyes...but o well... 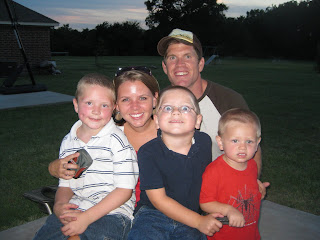 we did it! our first family vacation!! we've been on trips before with family and friends...but this was our first time to make specific plans to go away with just us...and it was sooo great! we went to sea world in san antonio and really has such a fantastic time, and took a ton of pictures, but here, i will hit the highlights.
we drove to san antonio on tuesday...had lunch with uncle butch and aunt alice on our way through austin...and got settled into our hotel. we went to the riverwalk and enjoyed a nice evening just walking around. 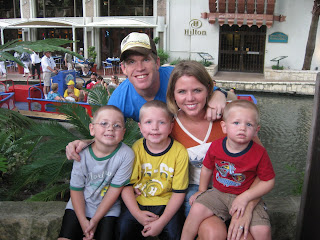 we got some icecream, and ian had a cinnamon pretzel... 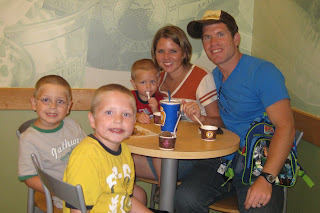 on wednesday, we made plans to get to sea world right as they opened. it was overcast and 80% chance of rain...making the weather cooler than normal, and keeping the crowds away! we didn't have to wait long for anything! the boys LOVED seeing shamu....tysen especially became attached. he was initially pretty scared when the show started and the whale came bursting out of the water, but slowly decided "he's a nice whale". 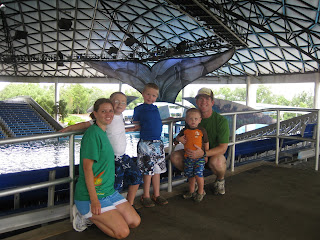 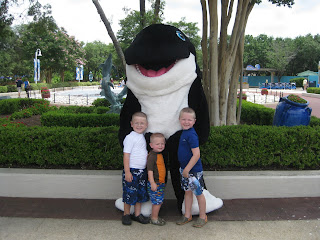 this was actually my favorite part of the trip. feeding the dophins. i'm not really sure why, but i loved how up close and personal it was. the boys were so brave, and all wanted to touch them, which really surprised me. we got some fish for them to feed with, and again, i was surprised that they touched the fish at all! they were so excited with being so close....it was a special time. 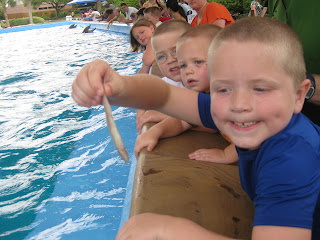 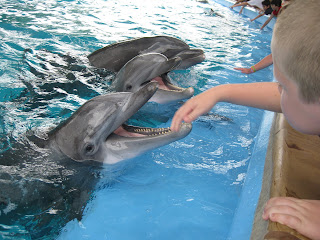 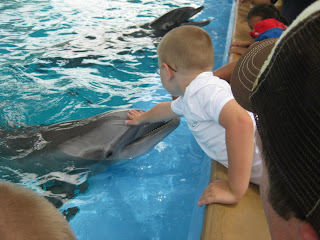 i should note that even with an 80% chance of rain all day, it didn't rain until after we were back at the hotel!!! we left the park about 3pm that day, so that we could get in some late naps before dinner with the morton and perez families --my college roomies!! we had a spectacular dinner that whit made, and stayed late just catching up. the kids did awesome! i love how they can all just pick up wherever and have a good time!
here we are:
tysen, me, ian, levi, rosey, isaac, elijah, logan, micah, whit, and emmie 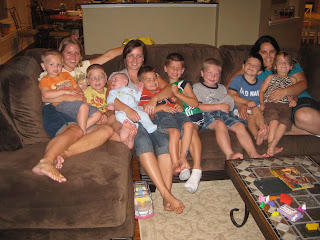 since we knew we would be out late on wednesday night, we had decided to take it easy on thursday morning, and get some naps in before hitting sea world again. thank goodness, because it rained ALL day...until about 3:30-4....which is when we got there!!! it was perfect! we didn't think we would get to see the waterpark, but the sun actually came out for a little while, and we were able to spend just over an hour at the waterpark. since we were in the water most of the time, i only got one picture: 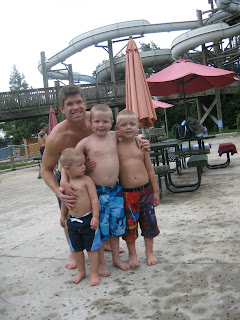 the boys wanted to see shamu again, so we went to the evening show. we mindlessly sat on the front row of the splash zone so we could see shamu up close. tysen was estatic! now, in our defense, we had already been to a shamu show, and another whale show, and sat close and in the splash zone. we got splashed, but nothing major. well, this was not the case here. in the last 30 seconds of the show, shamu sent about a thousand galloons of water our way, terrorizing tysen, and temporarily putting my phone out. we were not expecting that...and i wish that wasn't the last thing that the boys remembered about shamu, but they have slowly come back around. at first, tysen would describe it, and say "shamu splash me. i cry." but now he chuckles when he says "shamu splash me". and thankfully, we have pictures to remind us of all the fun we had before shamu sent a tidal wave on us.
so--beware....all the shows are different! you may OR may not get drenched by sitting in the splash zone! 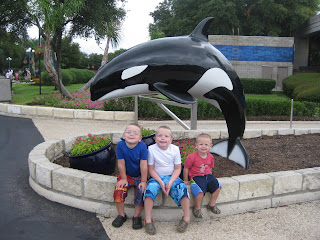 we left friday morning. we stopped just outside of austin, and wanted to eat somewhere that we couldn't eat back in denton. we found this little restaurant called "PLANKS" ...it was really cute cuz all the tables had different games and little activities. so it was a fun new atmosphere....and they made pizza from scratch, so they made ian a pizza with no cheese--which was a bigger deal to me than ian--but i thought it was cool! 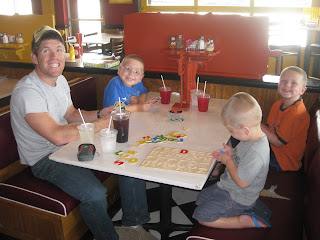 this was seriously such a great time. we were intitially kinda worried since we had never done a family vacation before, but the boys did great! and we actually felt rested, and everyone had fun....and just the fact that i can say that makes this trip a huge success!!!
Posted by The Vandy's at 9:52 PM No comments: