this is so minor and ridiculous, but i thought i would share anyway in case it might help someone in the future...:)

i'm constantly trying to figure out when to start teaching the boys to do things on their own...i mean, how do you really know this stuff? there's no manual! seriously, when do you teach a little boy to wipe his own bootie? i mean, he seems like he's old enough, but if he's not, that can get pretty gross, so when is the right time? (fyi, i've heard that 5 is round about age to start that and my sis-in-law kyle says definately before kindergarten...cuz she was a kindergarten teacher and that is not something they do there!!) :):) i've struggled with this in the past, and it always just comes at some point...dressing themselves, potty training, clearing the table and unloading the dishwasher....etc.... so, for months, i've been trying to teach logan to bathe himself...and he fought me every time!!! (ian would be in the same bath practically pulling the washcloth out of my hands wanting to do it himself) ....today, i discovered how to get him to want to do it. see, i've always used the baby head to toe wash...cuz i like the smell, and its pretty cheap since its shampoo and body wash in one. well, i randomly got some bar soap the other day just to keep in there for visitors (truth be told, joey has asked me if we have bar soap instead of body wash the past two times he's spent the night, so i finally just remembered to get him some:):) .... amazingly, the boys love this! they get all sudsy and get to wash all over...i don't know why this is different than using the body wash, but for some reason it is, and they both now LOVE to bathe themselves! so...if anyone is having trouble with this...try some regular old bar soap...
that's all!! :)
Posted by The Vandy's at 3:03 PM 6 comments: 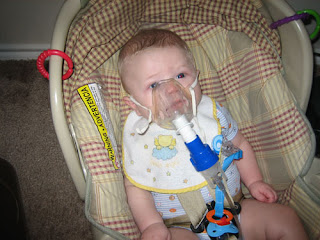 this was the scene in my living room this morning. most of you know, we are quite familiar with breathing treatments for ian, but i had to take a deep breath as i plunge into this world again with my little tysen. at least this time, there is more clarity though...let me explain.
ever since ian was born, on top of the crazy milk allergy that we still are confused about....we've always dealt with wheezing. it started at 4 months when he got rsv...and was constant for the first year and a half, and since then, it has dwindled significantly, but still there occasionally. i remember when ian was tiny, asking the dr. about how he was breathing cuz it sounded strange, and the dr. telling me that it was no big deal, he probably has a 'condition' that just made him breath a little louder. its a very weird memory, cuz i remember asking about it, and all i remember was "trache-something", "soft flap" and "breaths loud"....you know how drs. just talk way over our head sometimes, but that was the basic explanation, and there wasn't a reason to worry about it, so i didn't.
3 years later....with the birth of tysen...and a new pediatrician that i love....i have a whole new meaning of what this "condition" is....because i had a de ja vu moment when listening to tysen sleep peacefully, while sounding like he was wheezing. when i asked my new pediatrician about tysen's breathing (i actually recorded it and showed it to her), she immediately diagnosed him with what's called tracheomalacia . she then gave me an overview of what it is, and what it might look like in the future... my jaw dropped as i realized that she had just described ian's entire life!! she sent us to get him an upper gi done to rule out type 2 of the condition....this was when he was about 2 months....
this morning .... it has all begun. he had nothing more than a slightly runny nose last night, and then when he woke up, i thought there was a seal in the next room! the poor kid was so barky (sounding like croup), i took him straight into the dr. and sure enough....she told me what i was pretty sure she would.....since there's no fever, that its his tracheomalacia condition. it makes him appear much worse than he is...and my favorite part, we need to do breathing treatments and steroids to help him get over it (i cant even count how many times this was the routine for ian). so basically, any time tysen has congestion (even allergies) he could develop a cough that sounds horrid, and then gets better, but takes awhile to get it gone. this is like reading an autobiography of ian! he's always been the sick one....and everytime he gets even a little sick, it sounded horrible! and i always had to do treatment after treatment after treatment!!!!! and here i was thinking that he must have asthma because why else would he wheeze so much...but, that's actually another symptom of tracheomalacia. have ya'll ever had that feeling of wanting to squeeze someone (like your dr) and say, "need the info!!!"
you know, i had thought that ian was doing so much better these days, and all of the sudden, i see about tracheomalacia that they tend to outgrow it somewhat about 2 years. hmm... once again i can't wait to take ian to the new peditrician for his 3 yr checkup...she's amazing!
ok, on a lighter note... i'm learning to just let go of trying to make my boys be kind and gentle all the time. who am i kidding? they are boys! as nervous as i am, i'm trying to allow them a little freedom as long as they are both participants. see the video for a little piece of my world...24-7! http://www.youtube.com/watch?v=qZRMl8OJcw8
Posted by The Vandy's at 1:43 PM 3 comments:

We got some time to visit with our dear friends the O'Steens. We met them through our old church when I was pregnant with Logan. It's hard to believe that in only 4 years, we now have 6 kids between our families!
Logan, Chloe, Ian, Tysen, Evan, and Owen 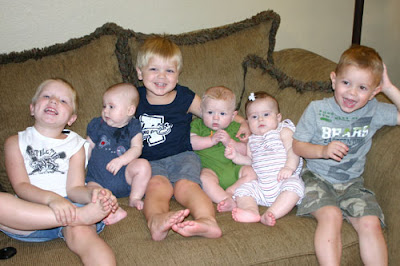 And as you can see , unless they make bigamy legal, Tysen is clearly going to have a difficult decision....:):) 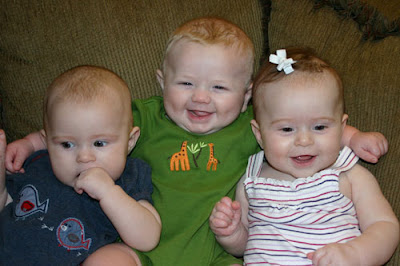 My sweet little man is going to be 4 months this week! So, of course, this means more pictures! 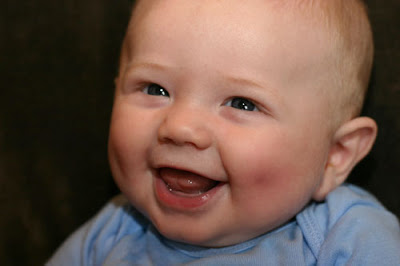 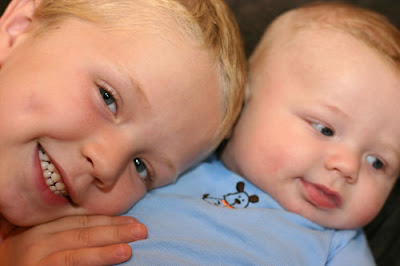 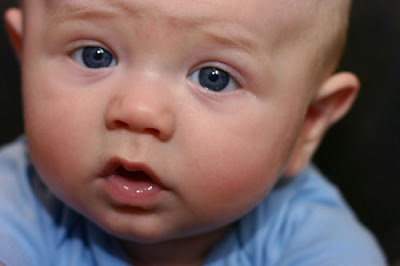 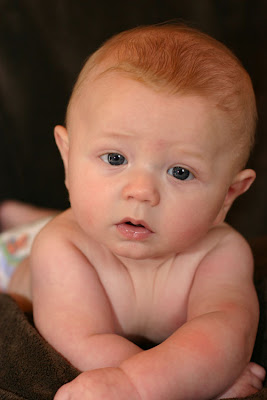 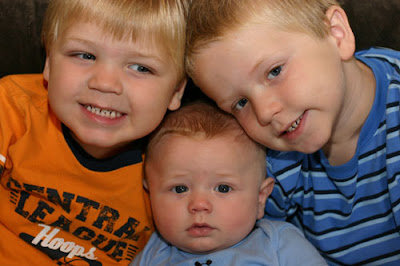 Every time my family gets together we have to attempt a picture of all the cousins. As you can imagine with 7 kids under 4...this can be daunting....but this is the first one that includes Tysen! There was this perfect little bench that they all sat on, and they did great. You can all see the bit of attitude that Logan is taking on...this is his "i'm too cool for pictures" look...its about how all his pictures look these days. And I love how Audrey is looking over at him so sweet...:) But here they are in order of age...:)
logan, audrey, zach, ian, aubren, kenzie, and tysen

and here's the boys....i had to show this one as aunt carleigh managed to catch logan's fabulous smile that he so rarely shows for pictures...:)

this is the fine work of my brother, trey...who "ian trae" happens to be named after. trey has also ventured into the camera world with mom and i...and has the most amazing work. i
kinda think ian looks like my little brother dan here....for any of you who knew dan as a little boy.

Moving on to big boy underwear is this week's big news!!!!! We knew we were going to wait until Tysen was settled in before attempting this with Ian, but I had kinda forgotten until a friend mentioned their recent potty training and I decided to just try and watch for his reaction. Logan was several months older before being ready, but I figured it can't hurt to try...and apparently he was more than ready!! We had several accidents, but each time, it was less and less as he would catch himself and then finish in the potty. I was sure that the big encourager to Ian would be the M&M rewards, but he rarely even remembered! He just loved it so much! It was hilarious as he jumps off the potty in super hero mode and shows off his muscles cuz he's so excited to be a big boy! The most amazing moment was when he told Andy he needed to potty, but having Tysen in his arms, and just having taken Ian a few minutes before, Andy said, "go ahead and go then!" ...thinking nothing of it....a few minutes later, Ian calls out and Andy finds poop in the potty!!! For anyone who has potty trained before, THIS IS MAJOR!!!!!!!!!!!!!! I couldn't believe it! Of course I know we're still learning, and will have more accidents down the road, but I'm so impressed and proud of my little man! Way to go, Big E!!!!! My favorite are the little boxer briefs cuz he's so adorable running around in them...but he likes the action figures of course. His favorite are what he calls "Mr. Incredible Hulk"....he likes to combine "mr. incredible" and "incredible hulk" but it is logical!! :)
Posted by The Vandy's at 9:12 AM 5 comments:

We took Tysen swimming for the first time! He didn't love it...but he didn't hate it. He was just very serious the whole time, but at least he didn't scream (until the boys jumped in too close and splashed him!) I hope he'll start to like it more cuz its the boys favorite thing to do! Tysen is most entertained when watching the boys play together. I love it when that happens...Here Logan is drilling Ian on his letters. He holds up a letter and gives him 2 choices and Ian has to figure out which it is... very cute....