logan has really developed his reading skills, and was showing some interest in reading the bible. one day, andy found him sorta reading his bible, and was pretending to write in it. he'd turn a page, and mark something up...but with a pretend pen, and all. andy asked what he was doing, and he said, "i'm doing my homework".....i guess he's been watching andy (in school at DTS) who has a lot of homework that is bible oriented. :) andy told logan that he could write in his bible "for real" if he wanted. logan's eyes widened and he got really excited. so andy taught him that when you are reading, if you see a word that is repeated...you can circle it...or if you find something that means something special to you, underline it....or if you think the word means something good, mark it....
well, logan is highly organizationally oriented, so this concept thrilled him. and after about an hour, this is what his bible looked like: 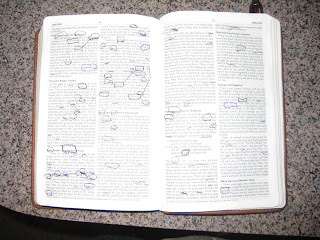 he started in the book of acts, cuz that's where they were in sunday school. andy told him that when he wakes up in the morning, he can stay in his bed, and read his bible...and even gave him a flashlight in case it was too dark to read. this only worked for a couple of days, as we noticed the evenings were becoming a struggle, and we could tell he was just exhausted. we had no idea what time he was actually waking up....it could have been like 5am....so we had to make a new rule and take away the flashlight, and said that he could only read if it was light enough in his room. that has worked much better. he has a pen attached to his bible, and still leaves it in his bed...and even works on it during the day some. he's currently in chapter 7.
So, the other funny part is that a few chapters into acts, he asked andy what he was reading...andy told him romans, so he decided to give that a shot.
this is romans: 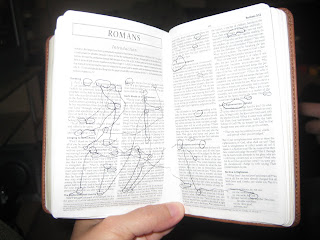 after the first couple chapters, he decided it was a little confusing and too much, so he told andy he was going back to acts. :):)
Posted by The Vandy's at 2:55 PM

That is so wonderful. I love Logan and how organized and thoughtful he is. He is the perfect theologian, they need to be organized!