so, pretty much since ian was born, i've just had it in my head that i would hold him back a year (in the school sense) because his birthday is so late in august...everyone acts like its just a given to hold your kid back if he's a boy...i hadn't thought too much about it, i just figured we would. well, yestarday, it was brought to my attention that he actually might be ready for kindergarten next year. i'm not gonna lie...the thought threw me into a tizzy, since i hadn't really even considered it. i had also expected my sister-in-law (who will remain nameless), ya know...since she is a former kindergarten teacher...to tell me if he was ready.... so i shockingly turned to kyle (so much for remaining nameless), and said, "do you think ian's ready for kindergarten?" and she sorta shrugged, "yes...he'd be really bored in pre-k".....what??!!?? i was pretty stunned. maybe i rely too much on other's advice, but how am i supposed to know this stuff? i don't want to be that mom who thinks her kid is perfect....so i'd rather an expert tell me its ok go ahead and put him in kindergarten...well, she's learned her lesson, and now knows she doesn't have to be asked to give her advice. :):)
anyway...kyle suggested trying to get him in a pre-k program for these last 2 months of school to help get him used to it...so, i called today, and there was one spot open at an elementary school not too far from us. (i had hoped he could get in at logan's school, but they were full)...we went to fill out the paperwork, and we finished just before class was to start, and they said he could go ahead and start today! he was more than anxious, and seemed thrilled to get to 'go to school' (and said that he hoped there would be cool boys and pretty girls!)... he ran right in his teacher said that he did great! he actually had a lot to say about it when he got home...it was pretty cute to hear him tell me everything he did...
my head was spinning from it all happening so fast...but that's just me...when i decide i'm gonna do something, i want it done immediately....but i was still kinda surprised that he started today!
i think of all of us, tysen was most traumatized...he cried and screamed "no! E!! no!! E!!" while watching his brother walk away into the building...i felt so bad for him! (don't worry, he was calmed pretty quickly with a little music from highschool musical)
what a day!!! 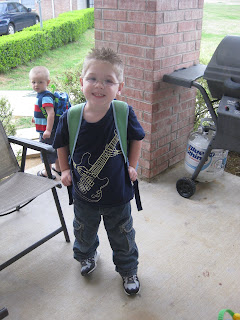 I bet you are spinning from that fast jump into school! He looks happy, though! And your great with fast transistions...Kindergarten, here he comes!!